Smaller towns (Tier 2) are gaining economic upliftment. However, there is a certain downturn in their cultural background. The article describing the decline in cultural importance of the otherwise famous places gives an insight into the paradigm shift from a semi-urban to urban outlook. Great artists such as Girish Karnad, Dr. D R Bhendre, Gangubai Hangal, Pt. Bhimsen Joshi hailing from very small towns in north karnataka have left a legacy.

Growing up in a middle class family is what makes half of India so deterministic and ambitious. In a era comprised of rich becoming richer and poor becoming poorer by the minute, earning a living is all the more self sustaining. I remember it costed a buck to patch a torn cycle tyre tube and owning a telephone at home was a leisure not many could afford. I grew up to teleserials such as Ramanand Sagar’s ‘Ramayan’, Renuka Sahane and Siddharth Kak hosted ‘Surabhi’, ‘Byomkesh Bakshi’, ‘Chandrakanta’, Jaspal Bhatti’s ‘Flop show’, ‘Chitrahar’, ‘Potli Baba’, ‘Street Hawk’, R K narayan’s ‘Malgudi Days’ and many more series which was then the bread and butter. Although I am not a big art/culture fanatic, I did enjoy what meagre instances I was exposed to in my early days of childhood.

But now with the advent of cable network and DTH, there seems to be a reason not to identify favorite shows aired by the second! Click there is a boredom talk show, click there is a sad song, click there is a romantic scene, click I hate politics, click there is a commercial, click this, click that. God, help the remote control to bear the brunt of our deeds. And do not forget the induced burden of conquering the systematic unsympathetic and understandably non understandable concept of growing up to school/college/job. A recluse wondering in a labyrinth of unending endeavor and desire. A materialistic objective to have defined and chased all life.

A root cause analysis is simply impossible as the voyage to self entrusted El Dorado  is never achieved! But here might be a few reasons which I jolt down in a minuscule effort tracking this spurious behavior of humans. Analyse a few statistics available on the AICTE web portal and your jaw drops knowing why education is a mass business phenomenon next to healthcare in todays #G enabled youth. A mass hysteria in the making, not to forget I am a part of this movement. What is your name beta? Are you an Engineer? Which college? What is your specialization? Why do people not ask something enabling a conversation? 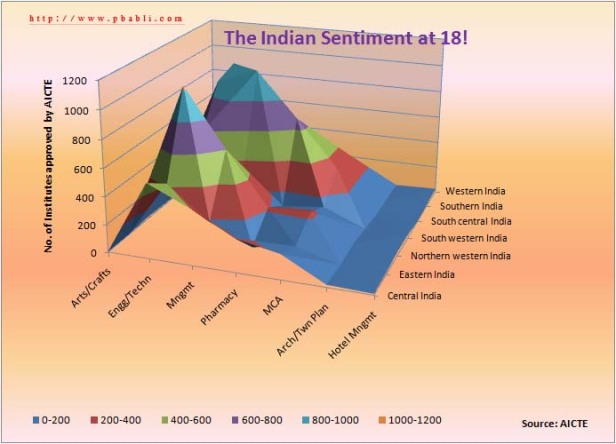 1. Growing up in a environment full of workaholics, shopaholics, dreamaholics,  melancholics is a very difficult task. By the time you reach an age to begin to think on your own the realization strikes you hard. A realization of grave circumstances. There is no reason why you should not be enraged. But as a ardent follower in a flock of herd/nerd you continue accepting the inevitable!

2. OCD (Obsessive Compulsive Disorder) might also be a criterion deciding our nonchalant attitude. If you ask a sample of Office going individuals what their first task at the work place would be, do not be suprised to hear a 80% probablity of respondants giving a answer that they log in to their mail!

3. We are a group of very passionate individuals. By emphsizing ‘we’ I mean the otherwise 99.9% breed who have their life in a stalemate mode. Yes, we ought to be passionate!

4. Being young means playing cricket for two thirds of the genre comprising male specimens. Add another one half of the other genre who are highly artistic but never utilize their prowess.

5. Doing what you really think you like doing is a very complex situation especially in India. A situation beckoned by the fact that almost 54% of India’s population is illetrerate, only 27% of the population resides in Urban areas and nearly 40% of population lives Below the Poverty Line (BPL), please read as defined by Govt. of India which is income less than Rs. 32 per day to be privileged under BPL.

My mom being an painter herself has all these color palettes in the home. She always has encouraged her offsprings to take interest in activities not defined in our basic education. A rich diversified category regarded hobby in our great motherland. But I am not a loser! That is what I represent the 99.99% population, the winners!! I consider myself rather unlucky to have a mindset so down market and pathetic in circumstances of disbelief and moral anguish. I hope to atleast follow a concept not so rigorous and self mystifying this moment onwards. For I cannot change the beginning but sure I can write the end all by myself!!

The moment my colleague (Rajaram) showed this worthwhile article, I knew that my heart and soul belonged to a place not so much familiar as of today. I am motivated and so do I think will be the rest of the not so passionate individuals after readings Arvind Adiga’s crisp thoughts in TOI. All the best.

and that is how I lost her!

life is a gamble, take it or leave it!